“Sing, sing a song
Sing out loud, sing out strong…” 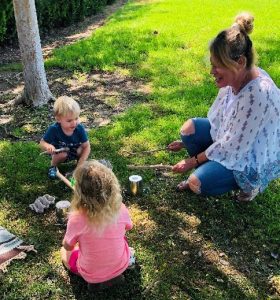 Anyone else old enough to remember the Carpenters or know who they are from a game show trivia question? Well, I was chillin’ like a villain {middle school speak for hanging out} in the Zebra English Teacher Lounge toady and came across Teacher Ellie’s seminar about incorporating song into the classroom. I was instantly transported back to a childhood moment, because of one simple word--- the word sing. Why the strong association? Let’s just say, when I first heard this song, not sure if it was on AM radio or a vinyl record, I was very young. The simple lyrics repeated melodically, over and over again, imprinted a pathway to memory, right when I was developing foundational language skills.

“Sing, sing a song
Make it simple, to last your whole life long”

Back to present day… I own and operate an outdoor preschool program in Southern California, a state which requires all credentialed early childhood education programs to integrate the foundational learning domains into daily curriculum, such as language, literacy, and performing arts. I send out a weekly parent letter to discuss the developmental skill the children will be working on in our cooperative, play-based classroom. Below is an excerpt from one of my messages for a music-themed week. I thought it might be a timely share for our collective, virtual classroom at Zebra English.

Let’s explore learning through the modality of music. There are three ways in which we all learn: visually, auditorily, and kinesthetically. Visual learners are motivated by seeing, auditory learners by hearing, and kinesthetic learners by doing. We often wonder why asking a child to do something repeatedly does not elicit the desired outcome. If the message of a verbal request is not received in the way in which it was intended, try singing it! There is good reason behind that famous “clean-up, clean-up, everybody clean-up” song and why many classroom teachers use bells to signal when it’s time to transition to a new activity. Music is a methodology that motivates the brain and the body to work together. It is a lesser-known foundational learning skill that falls under the category of performance art. The "Mozart Effect" refers to the intellectual impact that music has on the brain; musical rhythm activates the brain's ability to focus and retain memories. Interactive song is a great way for parents and teachers to implement all three types of learning styles by encompassing the trifecta of hearing, sight, and movement.

“Don’t worry that its not good enough
for anyone else to hear…
Just sing, sing a song”

Easily identifiable melodies or repeated verses activate neuron activity. Babies and toddlers can identify familiar music before word recognition. Children will often hum a song or bounce their bodies to the music before they sing the words. Then, suddenly one day they just blurt out the words. That’s when the magical connection to music and language occurs. Repetitive song assists in the formulation of foundational linguistic development. And, if you’re worried about the sound of your own voice… don’t be. Studies show that children favor the familiar sound of voices belonging to the caring adults in their lives over anyone else’s. So, when your talking-voice is transported into a singing-voice, they are super-duper prone to attentive listening!

Here’s to making music & memories with you!
~Lisa Lynn